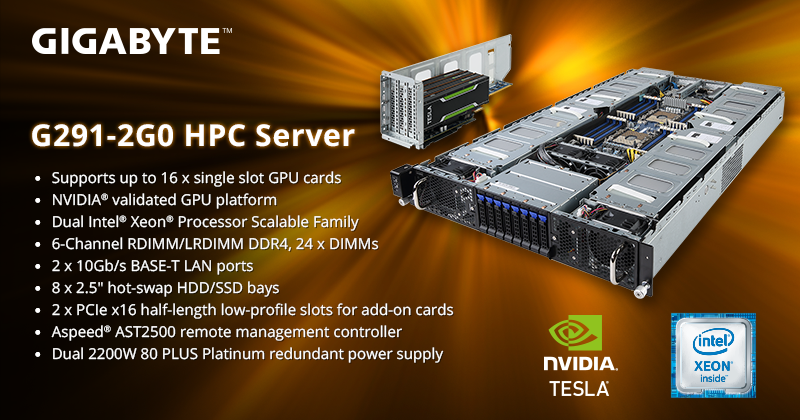 The G291-2G0 features dual Intel Xeon Scalable family processors with a TDP up to 205W, 6 channels of memory and 24 x DIMM slots for up to 1.5TB of memory per system, and is future ready for Intel’s upcoming Octane DC Persistent Memory (Apache Pass).

Storage wise, the G291-2G0 features a capacity for 8 x 2.5” hot swap SATA/SAS drives in the front, and an option for two additional 2.5” (7mm) SATA/SAS drives to be installed internally, or one SATAIII port can be used instead for a SATA DOM module, both of which are ideal for applications such an OS boot disk. 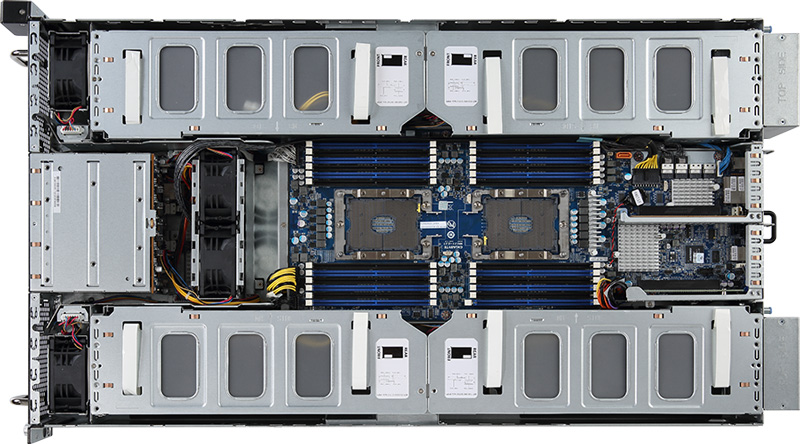 Most importantly, the G291-2G0 has been designed specifically to support NVIDIA’s Tesla P4 accelerator, which has been labelled as the world’s fastest deep learning inference GPU for scale-out servers. The Tesla P4 is described by NVIDIA as being able to slash inference latency by up to 10X in any hyper-scale infrastructure while providing an incredible 40X better energy efficiency compared to CPUs.

The ability of GIGABYTE’s G291-2G0 to support up to 16 x Tesla P4 GPGPU cards via four riser cards makes it ideal to be used as a high-density inference engine in the data center, and unlock a new wave of AI services such as speech recognition, image and video processing (such as an Intelligent Video Analytics Platform), or recommender systems used in online shopping & video streaming.

GIGABYTE continues to lead the HPC industry with products that are on-point to meet our customer’s performance needs in DNN training and inference while also lowering OPEX through ease of management and maintenance as well as power & cooling efficiency.

Please visit https://www.gigabyte.com/Buy for more information on where to buy the G291-2G0.