Get on the Fast Track with Gigabit LANIntroducing Gigabyte's New Line 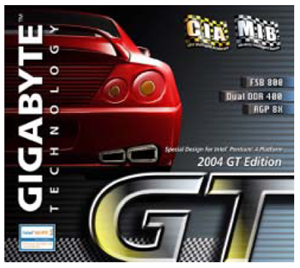 A Range of Onboard Connectivity
The new P4 Titan™ GT edition line of motherboards integrates the latest technologies such as Serial ATA andUSB2.0 interfaces as well as IEEE 1394 (model-based) to ensure complete and immediate connectivity of peripherals and consumer devices to your system. All the models also provide Gigabit LAN, resulting in superior throughput for the network so that data isseamlessly transferred at an astounding speed of 1000 Mb/s! The Gigabit LAN technology is provided by Marvell®, the industry leader in innovation of highest performance broadband communications technologies. With such throughput results along quality and reliability, Marvell® Gigabit LAN is the best and most efficient option for fast growing small office and home networks.


Gigabyte's new line of P4 Titan™ GT edition motherboards are fully featured with all the latest technologies and software required for a solid performing system. Besides guaranteed performance, these motherboards are reliable and backed by Gigabyte's warranty resulting in a package that is hard to beat.