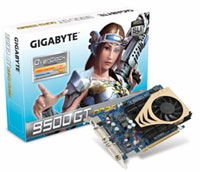 Ferrite Core Choke Design – Low Power Loss
If the MOSFET is in the "on" state, the current will then flow to the choke. A choke is an inductor that stores energy and regulates current. Choke coils help to prevent Electromagnetic Interference (EMI) and Radio Frequency Interference (RFI) from the power supply from interfering with the power circuit. Instead of using the traditional iron core chokes, GIGABYTE Ultra Durable 2 graphics cards feature Ferrite Chokes that are comprised of a compound of iron-oxide and other metal elements. These metal properties hold energy much longer than common iron-core chokes at high frequency, resulting in lower power loss.

All Solid Capacitors – Longer Life
From the choke, the current then passes through a capacitor. The capacitor stores electricity and delivers it to the component requiring power such as the GPU. GIGABYTE uses all Solid Capacitors to deliver maximum stability, reliability and longer system lifetime for general PC usage as well as for improved overclocking performance.