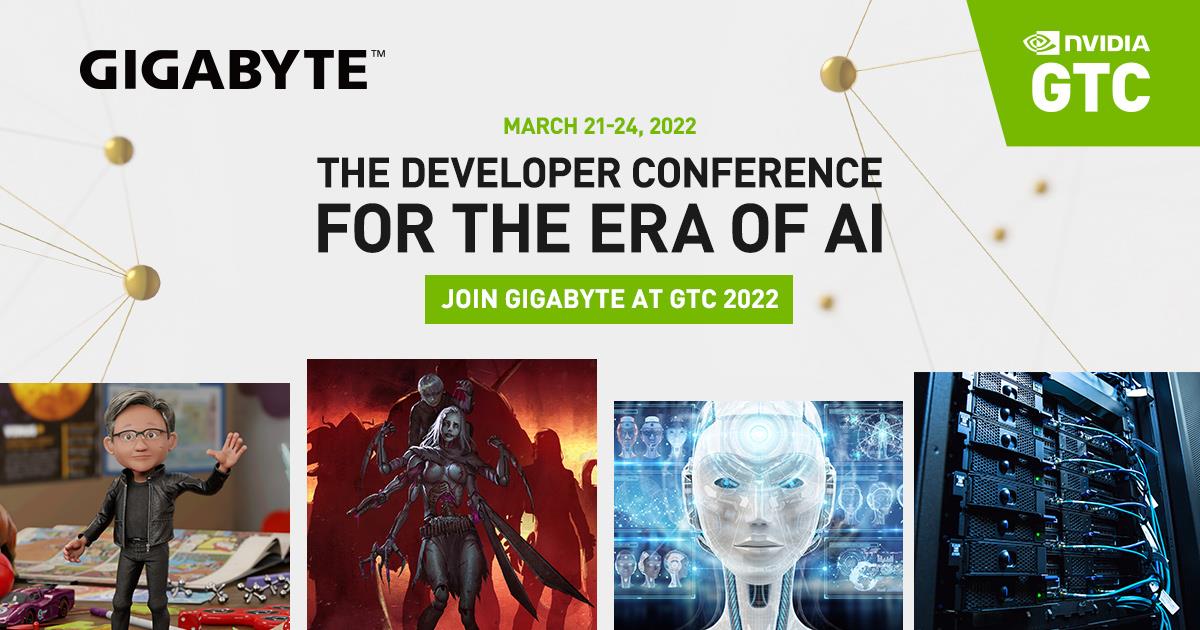 March 23rd 2022 – GIGABYTE Technology, (TWSE: 2376), an industry leader in high-performance servers and workstations, today announced GIGABYTE sessions at global AI conference NVIDIA GTC to explore enterprise applications and solutions, and confirmed that GIGABYTE is testing and validating servers and motherboards for the just-revealed NVIDIA H100 Tensor Core GPU. GTC (3/21-3/24) is the largest venue for GPU-accelerated products and innovations in AI, high-performance computing, and graphics. Attendees include researchers, developers, designers, and business executives, all joining to share and learn about technology that is transforming lives. One such great leap forward is the announcement of the NVDIA H100 Tensor Core GPU, which delivers unprecedented performance, scalability, and security for every data center while targeting compute-heavy workloads in AI, HPC, and data analytics.

GIGABYTE Sessions
GIGABYTE has two on demand sessions and one live session with Q&A at GTC. The first of these on-demand sessions, S42608, explores game development, while session S42697 introduces diverse server choices for supercomputing. The third session, S42607, will be live and have an AI platform talk followed by a Q&A session, and it will be scheduled to maximize APAC attendees.

Ushering in the Exascale Era with NVIDIA H100
Amongst all the important NVIDIA announcements, the new NVIDIA H100 Tensor Core GPU is of extreme importance to our GIGABYTE enterprise customers. The NVIDIA A100 Tensor Core GPU, which is still incredibly powerful and successful, passes the baton to the H100 that is also compute-focused and excels at AI training, HPC, and data processing. The H100 Tensor Core GPU adds the PCIe Gen5 protocol to double the throughput of the NVIDIA A100 Tensor Core GPU. New NVIDIA technologies include new generations of Tensor Cores, NVLink®, NVSwitch™, and Multi-Instance GPU. Additionally, NVIDIA confidential computing secures sensitive applications on shared data center infrastructure. As with the preceding NVIDIA Ampere generation, the NVIDIA H100 will also offer PCIe GPU and a SXM form factors, both of which come with a rich software ecosystem from the NVIDIA NGC catalog.

GIGABYTE has already started validating and optimizing servers for the new technology starting with the H100 PCIe GPU. With the launch of the NVIDIA H100, GIGABYTE will have enterprise products ready that come in 1U, 2U, and 4U server options for the H100 PCIe accelerator, with many of the 2U servers able to support up to eight H100 GPUs for a dense level of parallel processing. For the NVIDIA HGX H100 platform, there are plans for 2U and 4U servers for the respective 4 & 8-GPU solutions.

NVIDIA Validation Programs for Fast Server Deployment
NVIDIA continues to pull more resources into its ecosystem for rapid deployment and server validation in HPC and AI. GIGABYTE has a range of NVIDIA-Certified servers with NVIDIA GPUs optimized for the data center, including the NVIDIA A100, A30, and A40 Tensor Core GPUs. These systems are ideal for running the new NVIDIA AI Enterprise 2.0 software suite, and support for the NVIDIA H100 Tensor Core GPU will be coming soon.