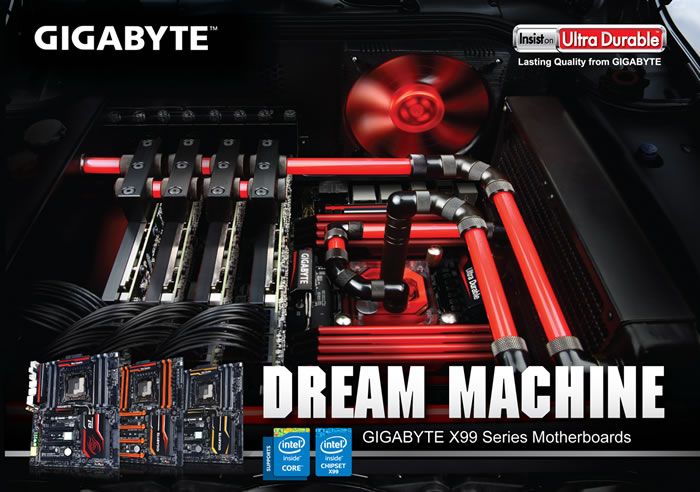 Designed to fulfill the needs of the high-end desktop segment, the new GIGABYTE X99 motherboards are the ultimate platform for users wanting long lasting quality, unrivalled performance and great looks that complement any system build. Offering a completely digital power design by IR to fully power all 8 cores of the Intel® Core™ i7-5960X, the GIGABYTE X99 range of motherboards will be the perfect backbone to your next PC DIY project. Whether choosing a G1™ Gaming, SOC-Force or an Ultra Durable™ motherboard, GIGABYTE has a wide range of features geared towards gamers, overclockers and professionals alike including all the latest generation connectivity such as M.2 and SATA Express as well as Thunderbolt™ expandability support. So enthusiasts, don’t be afraid to build your ultimate dream machine. GIGABYTE X99 series motherboards help make the dream a reality. 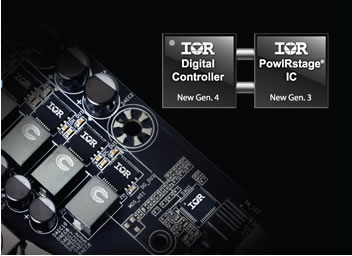 Genuine All Digital Power Design
GIGABYTE X99 motherboards use an all digital CPU power design from International Rectifier® which includes both digital 4th Generation digital PWM Controller and industry-leading 3rd Generation PowIRstage™ controllers. These 100% digital controllers offer incredible precision in delivering power to the motherboard’s most power-hungry and energy-sensitive components, allowing enthusiasts to get the absolute maximum performance from their next generation Intel® Core™ i7 Extreme processors.


Long Lifespan Durable Black™ Solid Caps and POSCAPS
GIGABYTE X99 series motherboards integrate the absolute best quality solid state capacitors that are rated to perform at the maximum efficiency for extended periods, even in extreme performance configurations. This provides peace of mind for end users who want to push their system hard, yet demand complete stability and reliability.


3-Way / 4-Way Graphics with Premium PCIe x16 Lane for Up to 320Gb/s Bandwidth
GIGABYTE X99 motherboards feature a unique PCI Express design that utilizes 100% of all 40 lanes from the CPU when in a 4-Way or 3-Way graphics configuration. Standard designs limit all 4 main PCIe lanes to x8(64Gb/s) bandwidth, but thanks to the onboard external clock generator combined with the direct connection of one of the x16 lanes to the CPU (switchless design), GIGABYTE X99 motherboards can unlock the full bandwidth available and provide the best graphics bandwidth possible to the user. 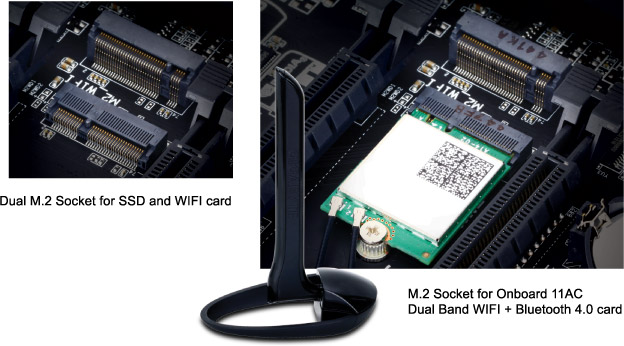 6x (30μ) Gold Plating
GIGABYTE X99 motherboards come equipped with a 30 micron thick gold plating for the CPU socket, 4 PCIe slots and over the 8 DIMM slots, which means that enthusiasts can enjoy better connectivity, absolute reliability and longevity for the diverse connectors overtime, without having any concerns about corroded pins and bad contacts. 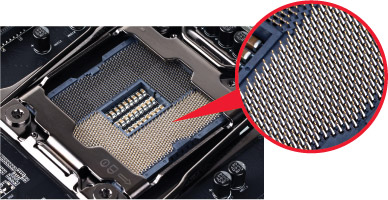 Safer Design Around Screw Mounting Holes Standard
Don’t worry anymore about accidental damage while mounting your motherboard to you chassis. GIGABYTE X99 motherboards all feature a wider copper ground pad and onboard components free area around the PCB screw mounting holes. This exclusive design reduces the chances of damaging any surrounding onboard components during the PC assembly process. Bigger copper ground pads also provide the added benefit of lower EMI disturbance for reduced noise interference across your system.

GIGABYTE’s exclusive 2X Copper PCBs design provides sufficient power trace paths between components to handle greater than normal power loads and to remove heat from the critical CPU power delivery area. This is essential to ensure the motherboard is able to handle the increased power loading that is necessary when overclocking. 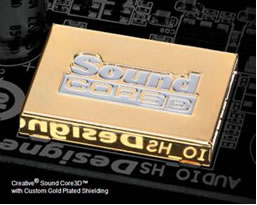 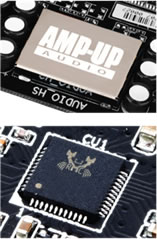 
All New Heat Sink with LED Design
GIGABYTE X99 series motherboards feature new heat sink designs that offer uncompromisingly efficient cooling on key areas of the motherboard including the PWM area and chipset (PCH). GIGABYTE X99 Series motherboards offer cooling support of the crucial PWM area so even the most aggressive and extreme configurations will be kept well within optimal thermal parameters. 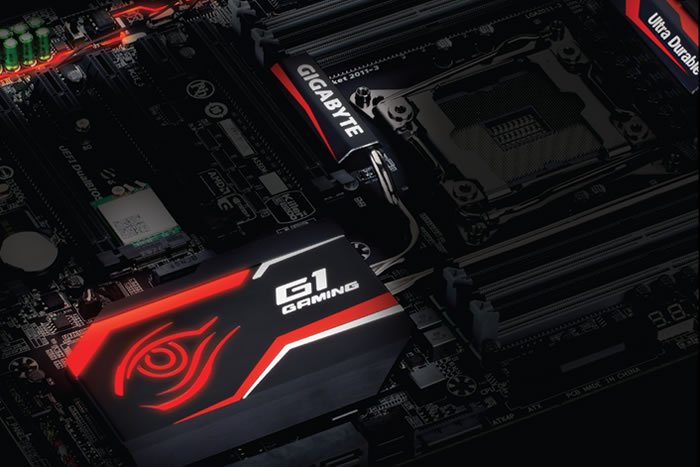 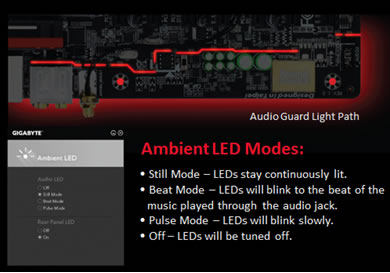 Ambient LED
GIGABYTE X99 motherboards feature LED lighting for the audio guard light path and the back panel LED, providing a cool, custom look to your rig. These lights are now programmable, so you can have them beat to the rhythm of the music you are listening to, or pulse at a soothing pace to create a great atmosphere to enhance the environment of your game, movie or music. 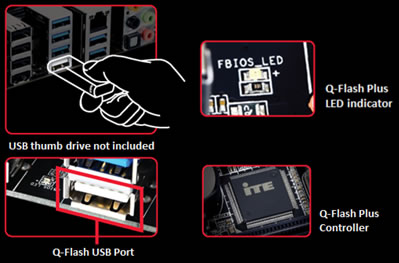 GIGABYTE Q-Flash Plus allows users to update to the latest BIOS using a thumb drive without the CPU or memory needing to be installed.

Do you have the latest CPU supported by your GIGABYTE motherboard but do not have the latest BIOS installed yet? This is no longer a problem with the new Q-Flash Plus feature. By simply downloading the latest BIOS and renaming it on a USB thumb drive, and plugging it into the dedicated port, you can now flash the BIOS automatically without the need to press any buttons or even the need of onboard memory or CPU. Utilizing the ITE EC 8951E controller, GIGABYTE X99 motherboard BIOS can be updated even if your system is unable to boot. An LED next to the EC controller will notify you once the procedure is complete and you are ready to boot your system normally. 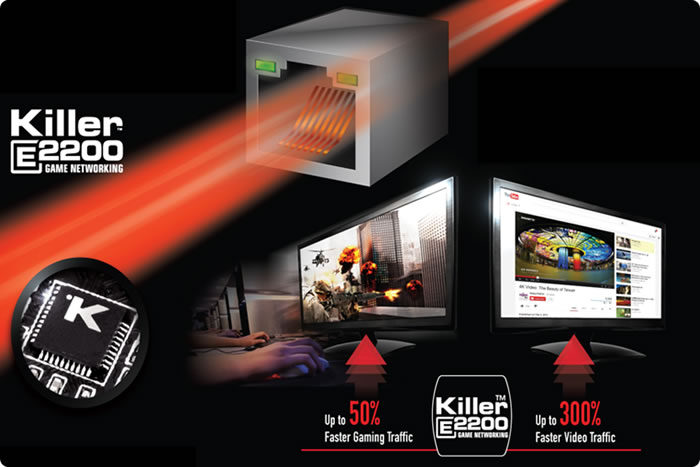 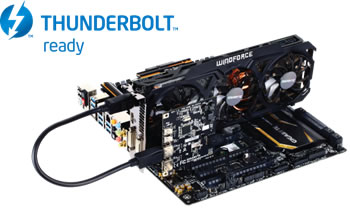 GIGABYTE X99 brings the expandability needed to make your system the ultimate one with an onboard pin header to accommodate the addition of a GIGABYTE Thunderbolt™ add-in card. The Thunderbolt™ controller can provide bandwidth of up to 20 Gb/s, compared to a max of 10 Gb/s on previous generation designs. This allows for incredible data transfer speeds when using high performance storage devices, while also supporting daisy-chaining of up to 12 devices and triple digital display support.

* Thunderbolt ™card and cables not included.
** For a list of supported Thunderbolt™ add-in cards, please visit the GIGABYTE website.

New Intel® Core™ i7 Processors on LGA 2011-v3 socket are Intel’s first 8 core desktop CPUs and are the first to support DDR4 memory. These next generation 22nm CPUs delivers greater performance and energy efficiency as well as the industry’s highest level of discrete graphics performance by sporting 40 PCIe Gen.3 lanes, which GIGABYTE X99 motherboards are able to take full advantage of, delivering bandwidth totaling 320 Gb/s for the most demanding gamers or graphics intensive creation tasks such as video editing. On top of that, Intel® Core™ i7 Extreme Edition CPUs deliver 8 core (16 threaded) multitask processing, higher frequencies, as well as larger cache size.

Additionally, GIGABYTE X99 users can draw even more performance out of their Extreme Edition CPUs, as they are fully unlocked for overclocking. With enhanced overclocking oriented options available on all GIGABYTE X99 series motherboards, users will be able to take full advantage of all the performance potential of Intel Extreme Edition CPUs.
*CPU core count and PCIe bandwidth varies by CPU model. 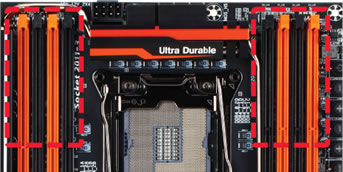 The next generation of DRAM is here with DDR4. With stock frequencies starting at 2133 MHz, DDR4 memory delivers up to 20% less energy consumption and twice as much density as the previous generation DDR3. DDR4 can help GIGABYTE X99 users to load their programs faster, increase responsiveness of their system and help them to handle heavy data tasks in a flash. GIGABYTE X99 motherboards provide 4 Channel DDR4 memory support across the entire range, bringing exceptionally fast memory access.