Make your prediction, get a chance to Win over $ 1,000 valued prizes 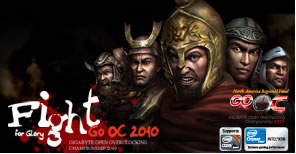 City of Industry, Calif., July 21, 2010 – GIGABYTE TECHNOLOGY CO., LTD., a leading manufacturer of motherboards today is pleased to announce a online competition : “Guess the winner” at the GO OC 2010 North America Regional Final website from July 21 to August 5, 2010,. Just sign up on the GO OC official website (http://gooc2010.gigabyte.com/north-america/guess-winner.html) and make your prediction for your chance to win GIGABYTE X58A-UD5 and X58A-UD3R motherboards, a cash prize of $200 for 1 winner, a cash prize of $100 for 3 winners and a GO OC Limited Edition T-shirt for 3 winners.

The 12 overclockers from U.S.A. and Canada will not only show their overclocking skills, but will also fight for the glory of their own countries by competing for the GO OC North America Regional Finals in California on August 7, 2010.

GO OC 2010 North America Regional Final official website :
http://gooc2010.gigabyte.com/north-americaLive Broadcast on August 7.
Spectators who are not able to make it to the North America Regional Final will be able to follow the event via a live broadcast and videos provided by Overclocking-TV: http://www.overclocking-tv.com/live. Stay tuned, the Fight will begin soon!