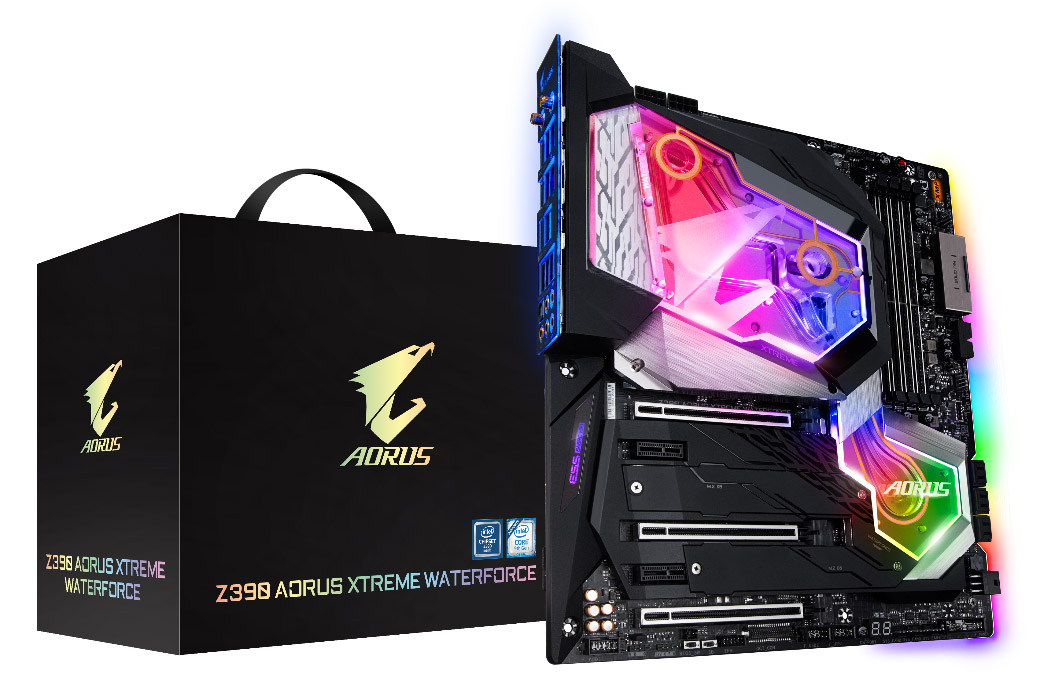 Taking it a step further from finned VRM heatsinks on high-end motherboards, Z390 AORUS XTREME WATERFORCE uses an extended monoblock design for extra heat dissipation not only within the VRM but also the processor, chipset, and even M.2 SSDs for more comprehensive cooling compared to standard fans or other types of liquid cooling. Z390 AORUS XTREME WATERFORCE adds a LAIRD Thermal Pad thickened to 1.5mm to increase the contact between the VRM and the monoblock, further bolstering heat dissipation and mitigating overheating resulting from task heavy workloads. As a failsafe, Z390 AORUS XTREME WATERFORCE has built-in liquid leakage detection so the protective mechanism will be activated immediately if the system detects any liquid coolants on the monoblock to prevent leakages from affecting system performance and components. Furthermore, the backplate on the GIGABYTE Z390 AORUS XTREME WATERFORCE dissipates heat from the backside PCB components and transfers it to the heatsinks while also providing extra rigidity and sturdiness for added durability. Plate bending and the annoyance of clipping fingers from sharper components on the backside is also prevented with this backplate design.

The board’s I/O shield not only adds extra style points but also provides solid protection for the USB 3.1 Gen2, Ethernet ports, audio jacks, and expansion ports. Power and BIOS (Clear CMOS) buttons are included for convenience and straightforward troubleshooting. Cable management is also a breeze with the Z390 AORUS XTREME WATERFORCE’s 24-pin right-angled solid-pin power connectors. The right-angled power connectors allow for easier installation as the power cables can be hidden more easily and their positioning doesn’t impede airflow to the board. Metal shielding on the power connectors gives them extra durability to prevent the wear and tear from inserting and removing cables repeatedly.

Z390 AORUS XTREME WATERFORCE comes with OC Touch to facilitate overclocking of the Intel® Core™ i9-9900K for users. With OC Touch, users can make incremental adjustments of 1 MHz or 0.1 MHz to their BLCK frequencies and the adjustments can be applied without rebooting the system regardless of whether the user is at the BIOS screen, using DOS or Windows®. Optimizing PC performance and finding the highest frequency for their processors has never been easier for users. The exclusive OC button can load overclock configuration presets so that less experienced overclockers can overclock at certain ranges. The OC-Touch function also helps users figure out the best overclocking settings for their processors. The built-in voltage measurement module keeps the user informed on the voltage of each component, making overclocking more convenient for users.

Z390 AORUS XTREME WATERFORCE has 3 sets of built-in PCIe slots with 2-Way SLI and 3-Way CrossFire multi-graphical configuration support so gamers will be able to indulge in excellent 3D performance and rendering from their high-end graphics cards. Ultra-Durable PCIe armor adds extra rigidity to the PCIe slots so they can hold the heavier, dual-width graphics cards without bending. The solid pin PEG slot serves as a source of auxiliary power to the PCIe slots for a more sufficient and stable power supply. Additionally, the Z390 AORUS XTREME WATERFORCE’s 3 sets of PCIe Gen3 x4 slots, SATA and M.2 slots are all cooled by the monoblock which offers plenty of cooling benefits for users building RAID 0/1 or RAID 5 arrays for enhanced data performance and integrity as well as helping users avoid thermal throttling on their high-speed NVMe M.2 SSDs.

GIGABYTE Z390 AORUS XTREME WATERFORCE provides users with built-in AQUANTIA 10 Gigabit Ethernet and Intel® Gigabit Ethernet but also offers the benefits of blazing fast WIFI with the gigabit barrier surpassing Intel® CNVi 802.11ac 160MHz 2x2 WIFI. With twice the signal strength compared to traditional antenna designs, the all new 4dBi ultra high peak gain antenna also supports both 2.4GHz and 5GHz WIFI frequencies for added versatility. Smart Antenna technology and its magnetic base plus dual antenna design allows users to install the device on magnetic surfaces so they can search for WIFI signals at different angles. Users will be able to make full use of the impressive flexibility for network connectivity that the motherboard offers.

Z390 AORUS XTREME WATERFORCE brings back the fan favorite RGB Fusion while adding new features to this ever-evolving lighting technology. Equipped with multiple onboard digital LEDs, RGB Fusion technology also supports external LED lighting strips for users to deck out their systems with even more lighting options. The board features a LED lighting zone that highlights the side and posterior of the motherboard for a more subdued and refined RGB touch. The digital RGB on the monoblock offers embedded dual-lighting effects, illuminating the waterways between the different cooling zones on the board for an ultra-cool look and can be further customized by the user. RGB Fusion App allows users to control the lighting schemes and patterns as well as sync them with their flashy peripherals so they can infuse their own style on their personalized system. Additionally, AORUS RGB Fan Commander is included which allows users to control the lighting patterns and fan speeds of external devices. With support for up to 8 fan devices, 8 digital lighting strips, and 8 sets of RGB LEDs, users can enjoy RGB Fusion at its full potential.

GIGABYTE Z390 AORUS XTREME WATERFORCE offers a diverse range of features through the implementation of the aforementioned technologies. With GIGABYTE Ultra-Durable Technology components, all-solid capacitors, and all digital power designs with intelligent fan control design, these motherboards are both energy-saving and environmental friendly while offering the performance and durability users have come to expect from the AORUS brand. For more information, please visit the official AORUS website: https://www.aorus.com/