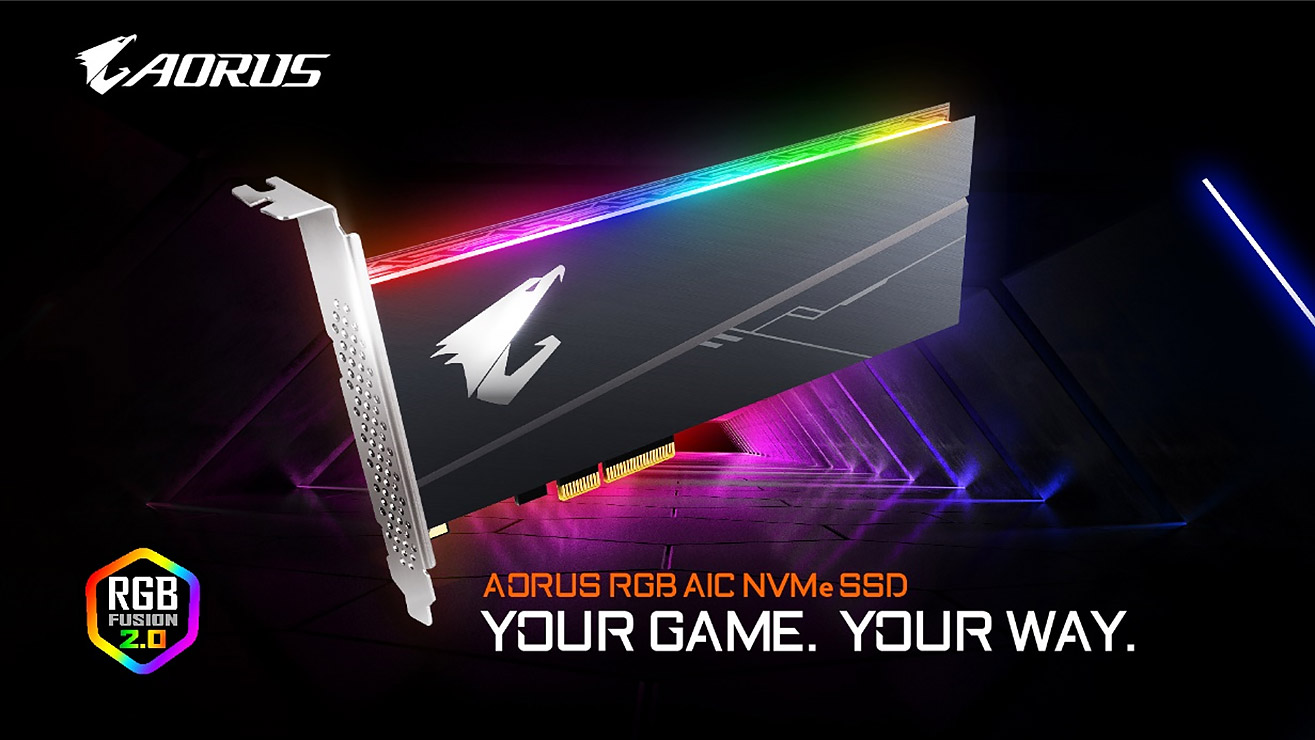 Taipei, Taiwan, January 8th, 2019 – GIGABYTE TECHNOLOGY Co. Ltd, a leading manufacturer of motherboards and graphics cards, continues to build off the success of its M.2 PCIe Gen3 X4 SSD by infusing impressive aesthetics and style to its all-new NVMe based, PCIe Gen3 X4 AORUS RGB SSD. To be introduced at CES, the newest AORUS RGB SSD comes in two form factors, AIC and M.2, and offers a nice selection of mainstream storage capacity options. AORUS RGB SSD showcases colorful, digital LED lighting and is the first SSD on the market to have full lighting synchronization with motherboards. The new SSD fulfills the GIGABYTE standard for durability and reliability, having undergone rigorous testing to ensure that users enjoy only the best and most stable SSD performance. 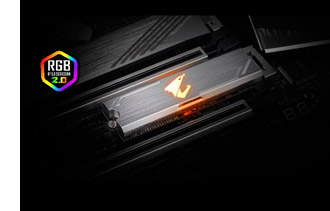 Freshly launched, AORUS RGB M.2 SSD comes in two mainstream storage capacities: 256GB and 512GB. The SSD delivers sequential read speeds up to 3480 MB/s and sequential write speed up to 2000 MB/s and is built with anodized, aluminum heatsinks for excellent heat dissipation to prevent heat from being detrimental to storage performance. The hairline finish on the heatsinks offers a clean-cut, elegant look and the AORUS Falcon logo serves as a core part of the design by adding extra texture to the M.2 SSD with its contour and digital LED lighting, complementing AORUS motherboards in a seamless integration of AORUS lighting and style.

AORUS RGB AIC SSD takes it a step further by offering larger storage capacity sizes 512GB and 1TB as well as faster sequential read speeds up to 3480 MB/s and sequential write speeds up to 3080 MB/s. The heatsink design of the AORUS RGB AIC SSD draws heavy inspiration from the critically-acclaimed Z390 AORUS Motherboard series, which set many benchmarks in performance with its cutting-edge thermal solution. AORUS RGB AIC SSD carries over many of these heat dissipation technologies and integrates them into its heatsink design to provide a proven thermal solution with superior heat dissipation compared to standard AIC SSD aluminum heatsinks. A 0.5cm thick dark gray aluminum matte heatsink as well as cross cut heatsink for increased heat dissipation area has been added and a thick LAIRD Thermal Pad has been placed between the heatsink and flash memory so that the SSDs can perform at max levels without bottlenecks from excess heat.

Excellent balance between performance and aesthetics is a trademark of AORUS design, never compromising performance for style. The AORUS RGB AIC SSD features a heatsink that has been treated with fine sandblasting on the surface and multi-step anodization while utilizing laser engraving for a stylish, clean-cut look. The metallic silver, mirrored AORUS falcon logo further completes the aesthetics on the SSD. AORUS RGB AIC SSD also comes with CNC processed screw holes which look more tidy and symmetrical but most importantly, make positioning more precise for users. Even the most demanding of users will appreciate the attention to detail that AORUS has placed into crafting the AORUS RGB AIC SSD.

To provide users with the most reliable and blazing fast read/write performance, GIGABYTE puts the AORUS RGB SSD through rigorous testing while mix and matching them with various GIGABYTE motherboards and different chipsets, as is standard with GIGABYTE products. Clearing testing from test software as well as high temperature and voltage tests, AORUS RGB SSDs meet the standards that users have come to expect from GIGABYTE AORUS products.

“For users seeking the best storage solution, PCIe Gen3 X4 SSDs offer the best performance especially for users looking to build disk arrays since high bandwidth interface is an indispensable asset when it comes to high-end performance,” stated Jackson Hsu, Director of the GIGABYTE Channel Solutions Product Development Division. “AORUS RGB SSD is another step in the evolution of our SSD lineup as we build on the positive reception and feedback to our previous SSD products, especially in capacity size, bandwidth, aesthetics/lighting, and more to fulfill the expectations of users. AORUS RGB SSD highlights what GIGABYTE products stand for: excellent performance and ultra-durability. Users can choose between AIC or M.2 form factors and tinker with the RGB Fusion App to enjoy lighting effects that can be synchronized with their peripherals for their own, unique setup. Stability, capacity, design, AORUS RGB SSD delivers on all aspects.

To be presented at CES, GIGABYTE AORUS RGB SSD will soon be launched and will be available on the market shortly after. For more information and news on GIGABYTE products, please visit the official GIGABYTE website: http://www.gigabyte.com