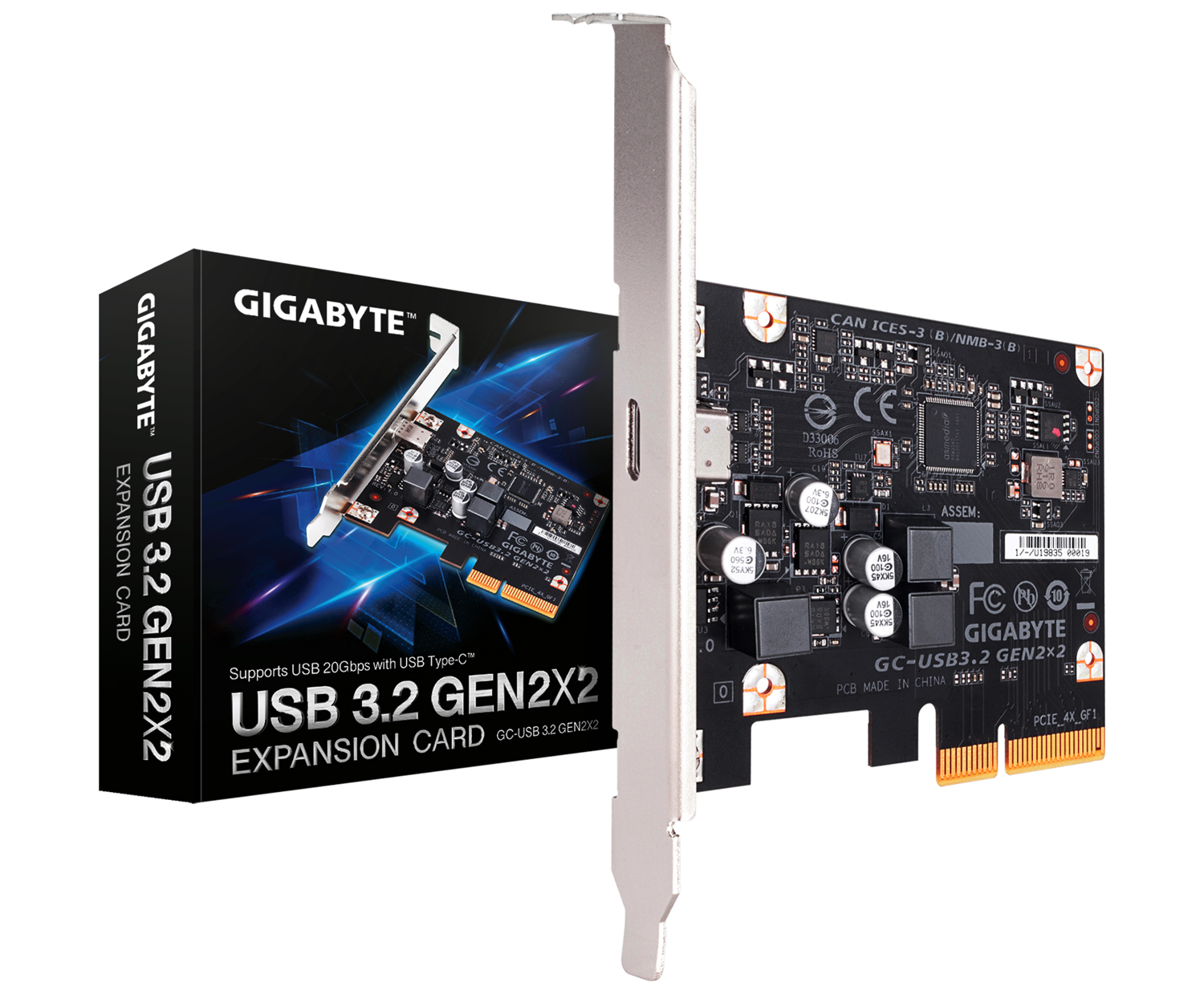 Taipei, Taiwan, November 27th, 2019 – GIGABYTE TECHNOLOGY Co. Ltd, a leading manufacturer of motherboards and graphics cards, today announced the release of the world’s first USB 3.2 Gen 2x2 PCIe Expansion Card, GC-USB 3.2 GEN2X2. The new PCIe x4 expansion card supports USB 3.2 Gen 2x2 for both AMD and Intel platforms and delivers up to 20Gb/s transfer speeds, doubling that of the previous generation. With the USB Type-C™ port design and backward compatibility with USB 2.0/3.0/3.1, the new expansion card offers an affordable way for users to upgrade to the USB 3.2 Gen 2x2 specification without having to get a new motherboard.

USB-IF first announced the USB 3.2 specification with multi-lane operation in 2017. The new USB specification has been officially named USB 3.2 Gen 2x2. The upgraded specification has twice the bandwidth of the previous generation and delivers transfer speeds up to 20GBps. Motherboard manufacturers have responded by future-proofing their flagship motherboards with full compatibility for the new specification. This is especially convenient for users who are currently looking to upgrade their motherboard. However, users who recently upgraded their systems or are satisfied with their current setup are getting the short end of the stick having to buy a new motherboard to use USB 3.2 Gen 2x2. As a workaround, GIGABYTE introduces a highly flexible and cost-effective solution with its new GC-USB 3.2 GEN2X2 PCIe Expansion Card. The new expansion card adds full support for the new specification on any motherboard with a PCIe x4 slot. Users won’t have to go out of their way to buy a brand new motherboard just to upgrade their USB specification so that they can enjoy 20GBps transfer speeds. When they do decide to upgrade their system, they can easily move their GC-USB 3.2 GEN2X2 to their new board to add USB 3.2 Gen 2x2 on an additional slot.

“GIGABYTE strives to offer users the most effective solutions at the best value. Since the announcement of the USB 3.2 Gen 2x2 specification, we’ve been focused on developing a simple, effective solution for all users alike,” said Jackson Hsu, Director of the GIGABYTE Product Development Division. “USB 3.2 Gen 2x2 and Thunderbolt™ 3 both use the USB Type-C™ slot but we cater to different needs. After close discussion with many experienced users, we’ve decided that the flagship board will support Thunderbolt™ 3 which delivers up to 40Gb/s transfer speeds while other products can be paired with the GC-USB 3.2 GEN2x2 PCIe Expansion Card to deliver 20Gbps blazing fast USB Type-C™ transfer speeds.”

GC-USB 3.2 GEN2X2 PCIe Expansion Card adheres to the GIGABYTE Ultra Durable standard and uses the finest components available. Rigorously tested, the new PCIe expansion card is ready to go and delivers reliable performance at an incredible value. The first 100 units have already sold out and the next batch will be released shortly. For more information on GIGABYTE products, please visit the GIGABYTE website: https://www.gigabyte.com/Motherboard/USB-Card-Device