Taipei, Taiwan, September 25, 2010 – The GIGABYTE Open Overclocking Championship (GO OC) 2010, the world’s largest Overclocking competition, successfully took place September 25, 2010. A total of 15 teams from 5 regional finals gathered at the Hua-Shan Creative Park (East 3 Hall) in Taipei, Taiwan to compete for the title of the GO OC 2010 World champion. After 4 hours 50 minutes of serious competition, GIGABYTE is pleased to announce that Matose from Romania was crowned GO OC 2010 Worldwide Final champion. Matose was able to maintain his lead throughout most of the competition with 64 points including the top score for Pifast at 13.830 seconds. Second place was stephenyeong from Hong Kong with 52 points and third place went to speedtime.wing from China with 42 points.

"We are setting a remarkable record of our own, by being host to the world’s largest overclocking contest," said Dandy Yeh, President of GIGABYTE TECHNOLOGY CO., LTD in his opening speech for GO OC 2010. "as a leading motherboard manufacturer, GIGABYTE is committed to delivering the very latest technologies and innovative products to our customers, and we promise to continue developing high-performance, market leading technologies in the future." he added.


Following was an opening ceremony to wish the contestants good luck and to get them ready to face off in overclocking battle.

In addition to the overclocking competition area, GIGABYTE had on display a time tunnel highlighting GIGABYTE GO OC 2010’s history, including images from this year’s 33 country qualifiers and 5 regional finals. Also on showcase were several live and static demos, including motherboards featuring GIGABYTE’s latest 333 (SATA 3, USB 3.0 and 3x USB power), Cloud OC, and Ultra Durable™ 3 technology, as well as a demo of GIGABYTE’s latest X58A-UD9 motherboard.

GIGABYTE also showcased the latest high-end products from the sponsors of the event, as well as the hardware used for the competition. First class hardware is the key to achieving successful, record-breaking overclocks, and GIGABYTE was honored to have several industry-leading venders including Intel, ATI, ADATA, Seagate and ENVISION to participate in this historic event.

GO OC 2010 will be remembered by overclockers and enthusiasts alike as the biggest and most extreme overclocking competition in history. So what does GIGABYTE have in store for GO OC 2011? You’ll just have to wait until next year to find out. 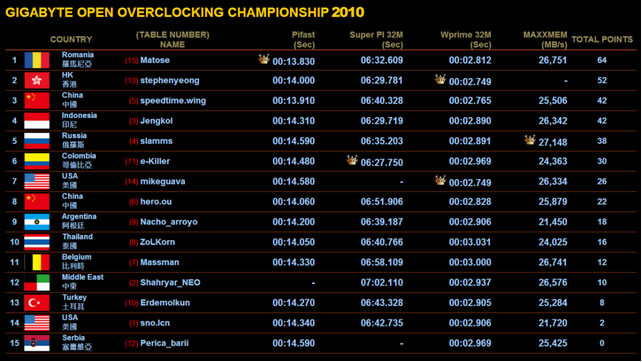