GIGABYTE GA-Z170X-Gaming G1, GT and 7 now included in the line up 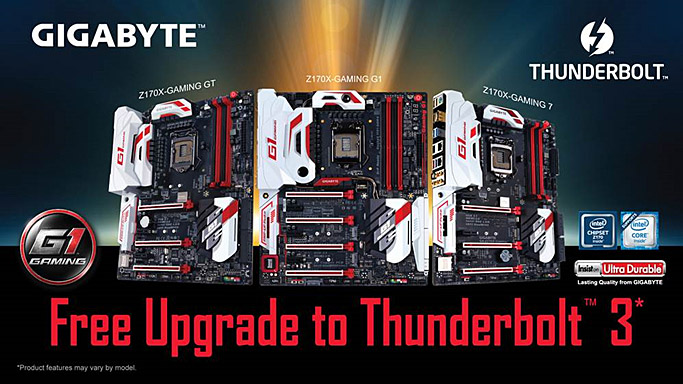 Users that wish to upgrade their motherboard can download an updated version of the firmware from GIGABYTE’s website. Once the user installs the updated firmware, Thunderbolt™ 3 support will be enabled on the motherboard.

Powered by Intel’s own Thunderbolt™ 3 controller, the new Thunderbolt™ 3 protocol, which is available over a USB Type-C™ connector on the back I/O of select motherboards, brings an unprecedented single-wire bandwidth of up to 40 Gb/s -- twice more than the previous generation!

Thunderbolt™ 3 over USB Type-C™ supports DisplayPort 1.2, which is able to drive a 4K resolution display at 60 FPS, and revolutionary industry-first features such as power delivery up to 36W, as well as the ability to daisy-chain up to 6 devices per USB Type-C port.

For more details about Thunderbolt™ 3:
https://thunderbolttechnology.net/