A Content Creator’s Guide: How to choose the ideal laptop in 2020

There are hundred kinds of laptops on the market: which one is able to meet your requirements? How to pick the most suitable screen, processor, graphics card and RAM? This article has everything you need to know. Check it out now! 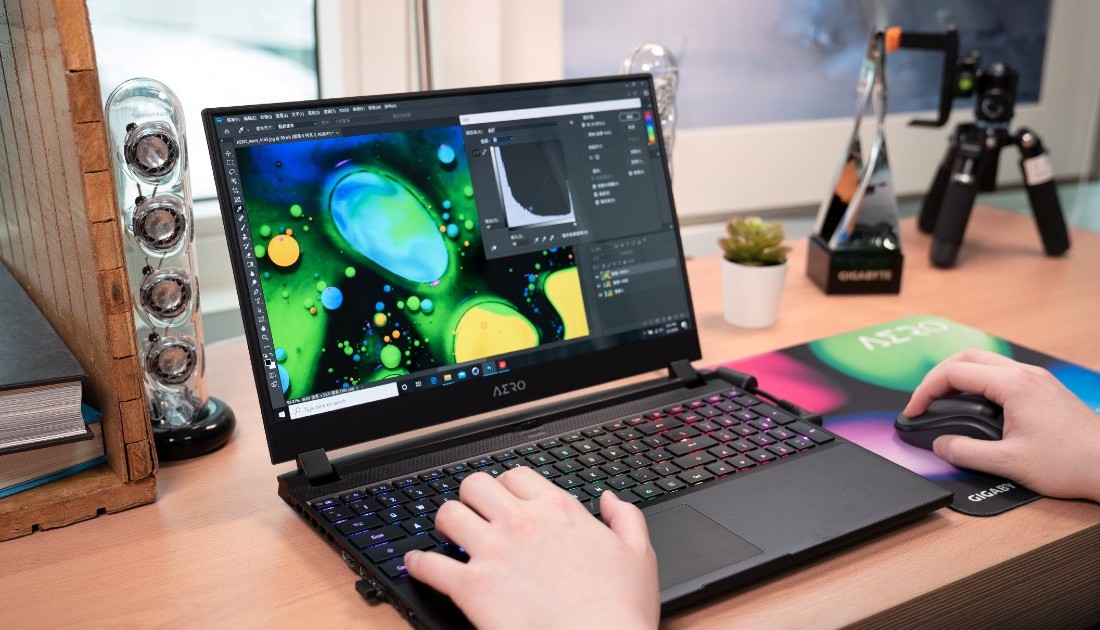 For many people, content creation is currently the most important part in their daily lives. In the past, many professional designers, Youtubers and photographers could only use PCs for creation because laptops tended to overheat or didn't have enough performance or memory. However, laptop currently comes with much more powerful CPU and GPU performance, not to mention that the storage space has been greatly improved as well. Nowadays, various laptop manufacturers are specifically producing so-called “content creation laptop”' for the content creator groups.

Nevertheless, there are hundred kinds of laptops on the market: which one is able to meet your requirements? How to pick the most suitable screen, processor, graphics card and RAM? This article has everything you need to know. Check it out now! 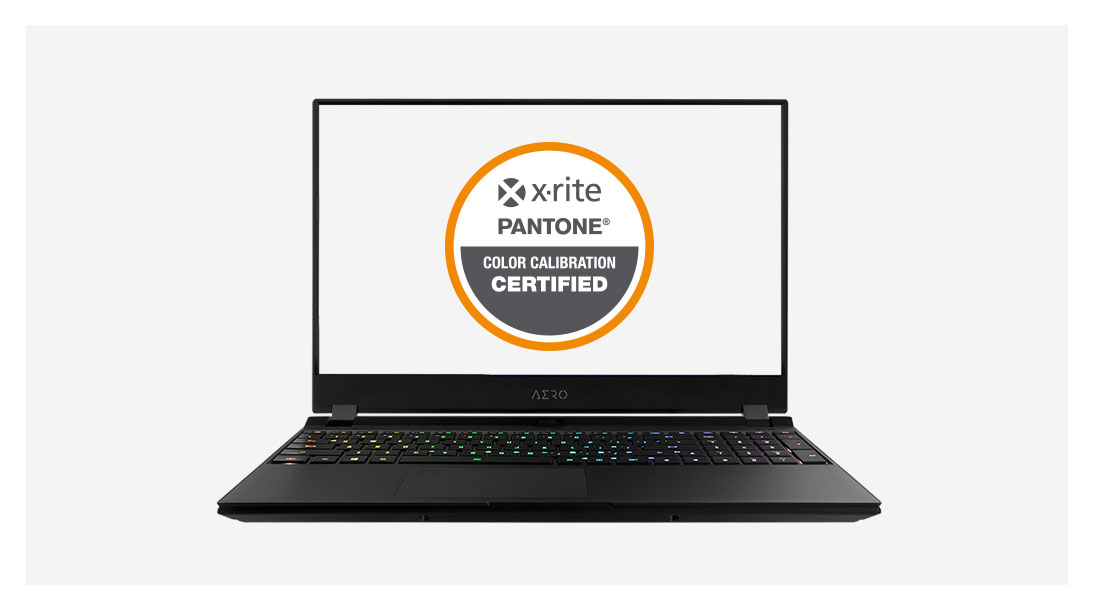 Screen: thin border, color calibration certification. Choose according to your application & budget
Other than having high performance, customized content creator laptop also possesses great precision of shades and a wide range of colors. Current content creator laptop usually emphasizes the color calibration certification, with the most common one being those from PANTONE, an international standard color organization, signifying that the color of your screen is as accurate as that of a color chart. The PANTONE certification has different levels. GIGABYTE's laptop is the only one that has every single one of its panels calibrated. 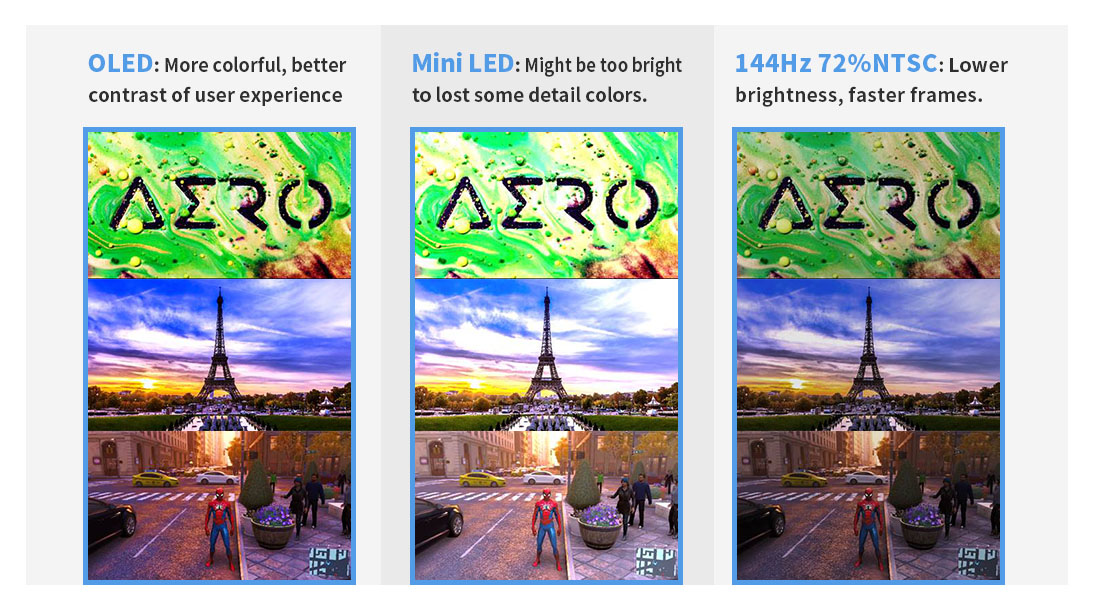 In terms of the panel, AMOLED is 25% more colorful than the normal LCD panel, with the most vivid colors and purest black. Moreover, AMOLED emits 60% of the harmful blue light, compared to the general LCD screen. For common LCD panel, IPS with the precision of color and wide viewing angle is the top choice. Mini LED, launched in this year, is a little bit pricey, with the high contrast coming from extreme brightness. Since the user normally doesn’t really need high brightness, which poses extreme stress to the eye after using for a long time, it still remains to be seen whether this new type of panel fits your requirements or not. 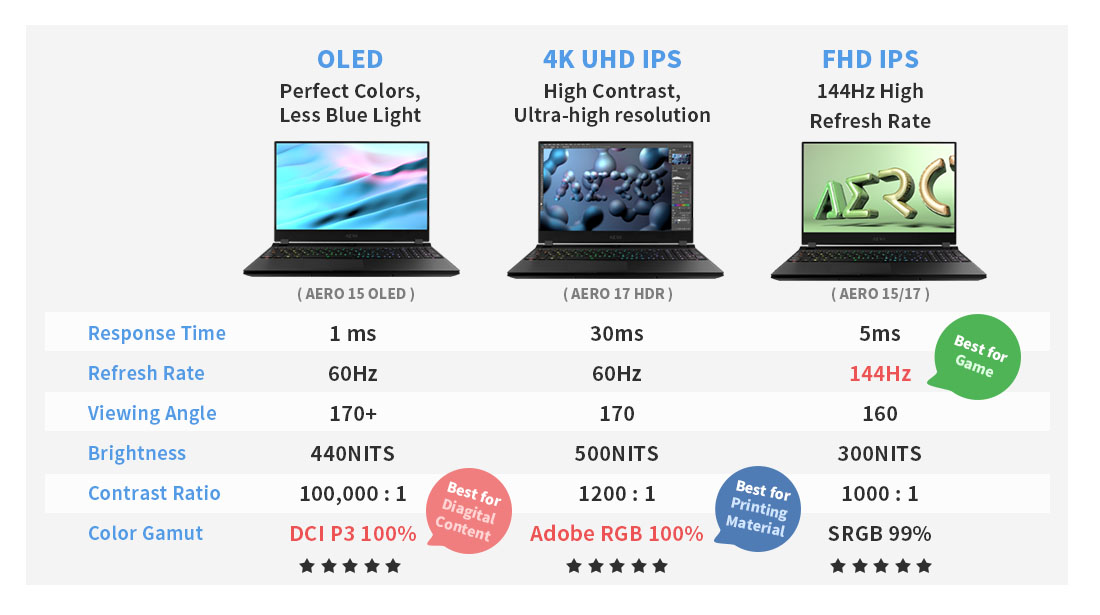 4k UHD resolution pixels have four times finesse more than that of Full HD, so pick it if you want more finesse while examining your images. If you’re also a gamer, picking a laptop with a refresh rate higher than 144Hz will turn your drawing laptop into an excellent gaming equipment.
CPU: Graphic design laptop equipped with Core i5/i7 can only be described as “Powerful”
CPU (central processing unit) determines the image loading speed of the laptop. The Intel Core series, the most common CPUs equipped in laptops, is divided into four types: i3, i5, i7 and i9. The larger the number is, the better performance the CPU is. i9 is the best among them. In April 2020, Intel also launched its 10th generation processor, having better performance than the previous version. 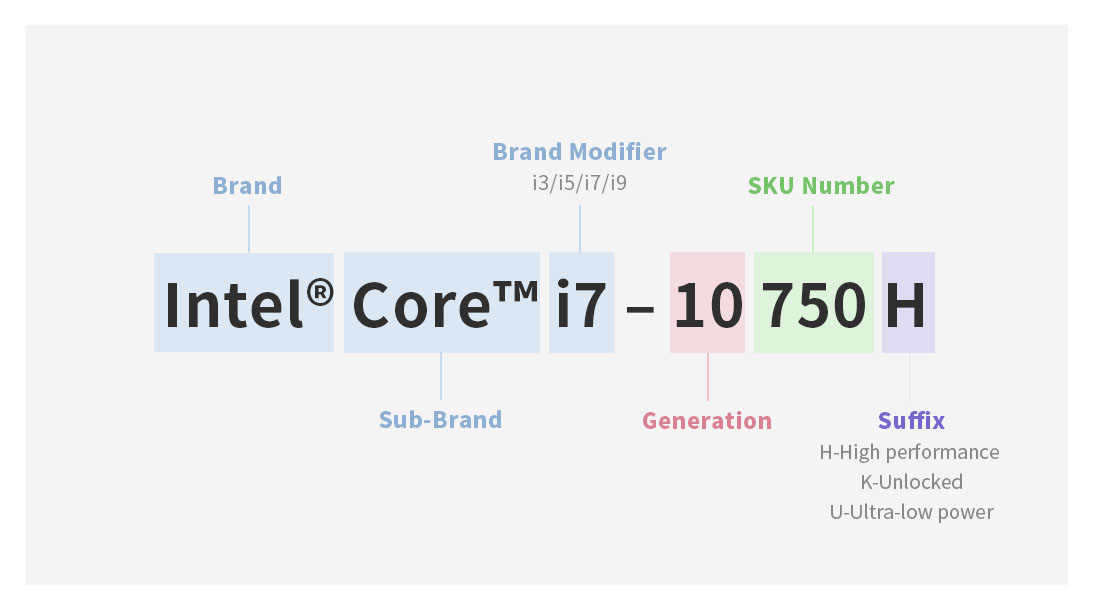 The difference between Core i3, i5, i7 and i9 lies in their number of clocks, cores, and threads. For gamers, clock is the most important factor in running a single program, while for designers working on editing multimedia, the number of cores is much more important. Current computer processor is equipped with at least two cores. 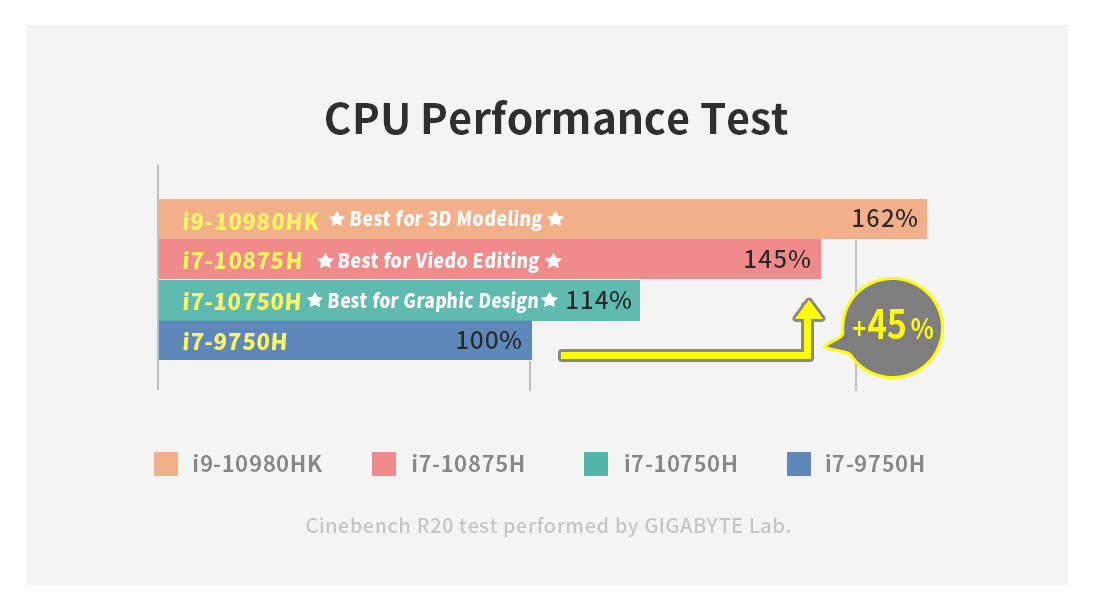 ▌Graphic Design / Photography
You might need a Core i5 with four cores to smoothly run your computer programs. If your Photoshop outputs often have resolution higher than 300dpi or many complicated layers, Core i7 with six cores may be your ideal solution.
▌Video Editing / 3D Design
For complicated pseudo-3D animation and image design, film editing post production or Rendering stereoscopic images, if you use 4K film editing software such as Adobe, After Effects and Premiere, a Core i7 processor or even better one is required to make everything much smoother.
▌3D Modeling and Rendering
If you need to edit complex 4K resolution animation, 4K movies, large stereoscopic 3D models or AI simulation and VR 3D processing, you might need to have a laptop equipped with a Core i9 processor to have the best effect. 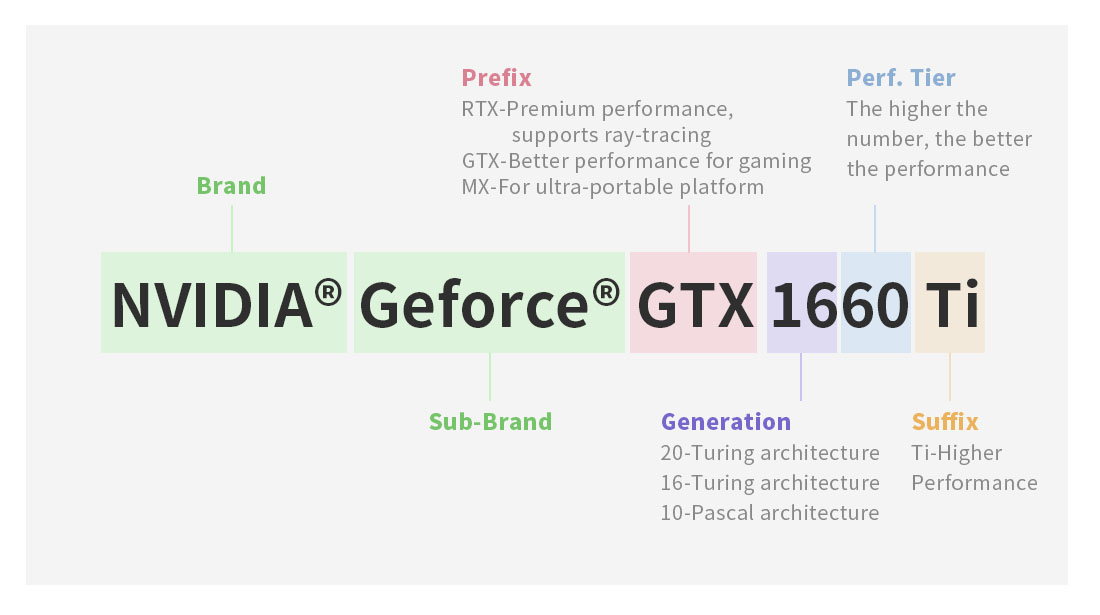 For digital art or content creation, the GPU should be at least the level of GTX. The new RTX series has even stronger hardware capacity which is very helpful for 3D rendering and animation design in the next two to three years. Although the MX or GT series are labeled as discrete graphics card, they are out-of-date. Don’t think about it.

Just like the laptop CPU, the latest product from the same series represents better performance. The larger numbers indicate that the GPU has more cores. Check the image below or the further reading for more details related to pick the suitable GPU. 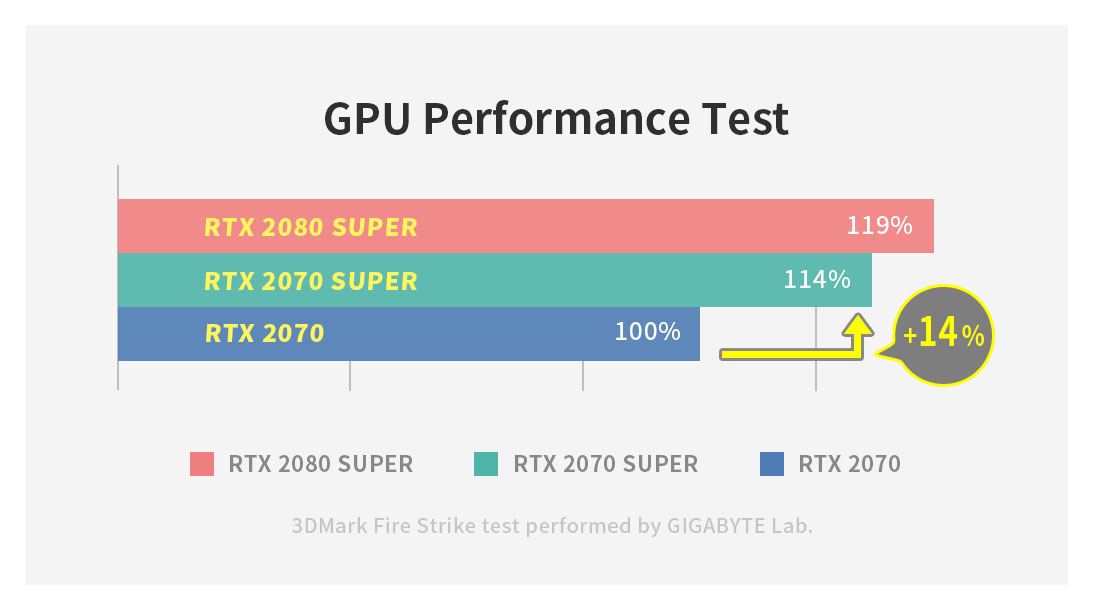 ▌Design / Photography
For 2D designers and photographers doing image processing, the GTX series should be good enough. Note that the first two numbers of the GPU stand for the architecture generation. The GTX 16 series released in 2019 aims to replace the previous GTX 10 series. In 2020, the latest GPU released by NVIDIA has no more 10 series products. If you want a laptop with the newest graphics card, GTX 10X0 is definitely not your option.

▌Video Editing / 3D Design
If you are an editor or a 3D designer, upgrading your graphics card to GeForce RTX, which supports ray tracing technique, will make your images have better finesse. Designers who often use video editing software such as Adobe After Effects, Premiere Pro or DaVinci Resolve can pick RTX 2060.

▌3D Modeling and Rendering
If you are an architect, engineering modeler, 3D design artist and use Revit, SketchUp, 3DS MAX and AutoCAD for larger or more complex 3D modeling and material structure rendering, RTX 2070 or even Super and high-level graphics cards are the best choice for you.

Memory and Storage Space: 8GB RAM and SSD are definitely necessary
For 2D/3D graphic design on the laptops, if you don’t have enough memory, software simply wouldn’t run no matter how good your CPU/GPU is. The basic graphic design laptop needs at least 16GB RAM, but some customers will usually go for 32GB RAM. At present, the mainstream specification of the laptop platform is paired with dual-channel DDR4-2466 frequency memory.

Fast storage speed can drastically reduce time spent on accessing your creation. Having enormous amounts of storage space to put your materials and completed works in is also necessary. A laptop equipped with SSD is your top choice. It is recommended that the high-speed M.2NVMe is a must. Combined with PCIe Gen3 x4, the accessing efficiency is at least 10 to 30 times better than that of a traditional hard disc drive.

▌Graphic Design / Photography
For graphic design, you will need at least 16GB RAM to meet the requirement of real-time image storage. You should also have at least 256GB storage space.

▌Video Editing / 3D Design
For more complicated graphic design or video editing, it’s safer to get at least 16GB RAM. Only the storage space above 512GB will be able to meet the huge storage requirements of audiovisual files.

▌3D Modeling and Rendering
If your work needs to run software such as 3D Max, Rhino or SketchUp for 3D rendering and modeling, your RAM should be at least 16GB, sometimes even 32GB, with the storage space of 512GB at least. 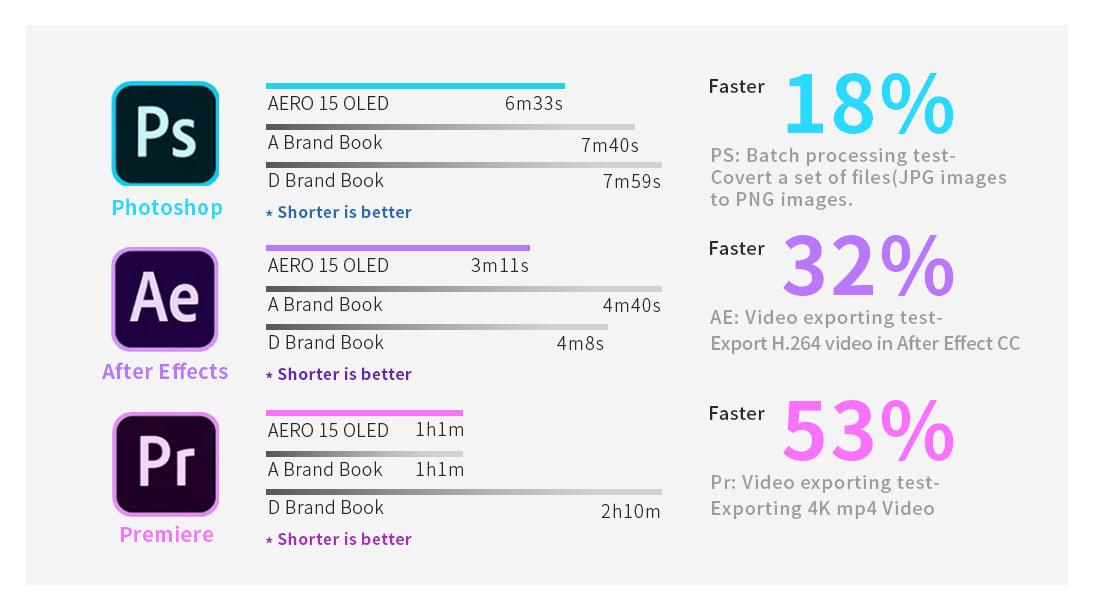 Heat Dissipation: The key of maintaining high performance and preserving laptop life cycle
No matter how great your CPU and GPU are, its performance is going to fall down to the bottom if the laptop overheats. In the case of continuous high performance computing, the CPU and GPU chips will generate waste heat. When the temperature reaches a certain level, the laptop will underclock, causing it to crash and lag.

If you want your CPU to have a corresponding high performance, it is important to choose a laptop with great heat dissipation function. Besides maintaining good performance, the laptop life cycle will also be prolonged. GIGABYTE, started as a motherboard and graphics card manufacturer, pays much attention to heat dissipation in order to maintain the performance of CPUs and power-intensive graphics cards. The laptop also features reinforced heat-dissipation design on its CPU and GPU. In addition to dual fans and multiple heat pipes, the air outlet is also manufactured according to an optimized design with multiple certifications. Although the laptop is extremely thin, it will not miss anything important.

Furthermore, GIGABYTE has specifically cooperated with Microsoft Azure AI, the laptop will use AI to automatically adjust the various parameters for you. Compared to other laptops, the speed of the GIGABYTE's laptop will be much faster while processing the commonly used editing software under the circumstance of having the same CPU and GPU. 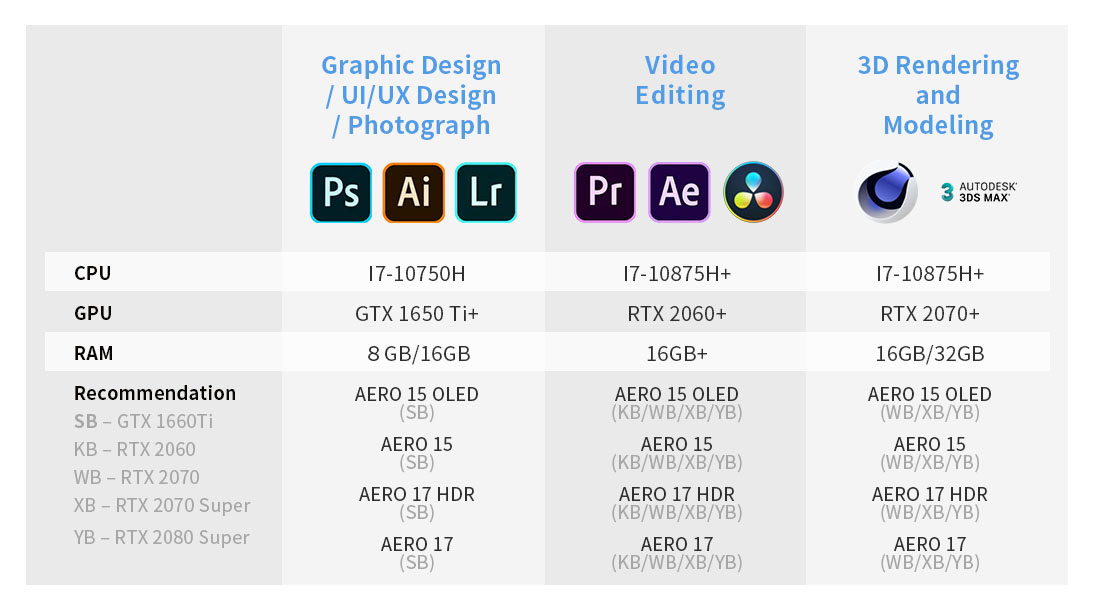 Conclusion
There are also other details for you to pay attention to, such as having enough USB ports for a graphics tablet, being able to connect to multiple monitors, and whether your battery capacity is large enough. GIGABYTE's laptop for content creation, “AERO”, has all these features. The characteristics of “AERO” are listed as follows:

In a similar price range, GIGABYTE also comes with OLED / 4K UHD or 144Hz with better resolution and refresh rate. GIGABYTE is definitely your top priority.

The following table summarized the recommended models for you - whether you are a graphics designer, video editor or architectural renderer and modeler, just pick your ideal laptop according to this table. 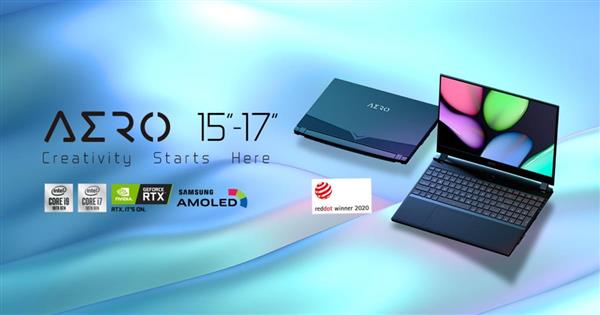 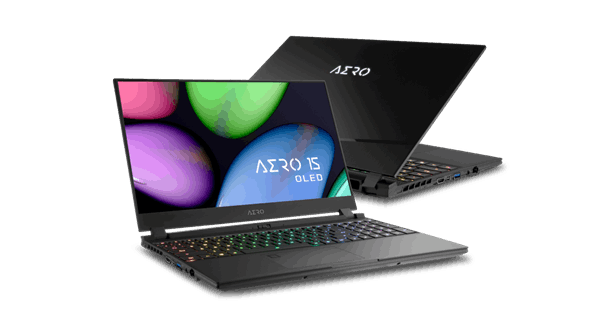 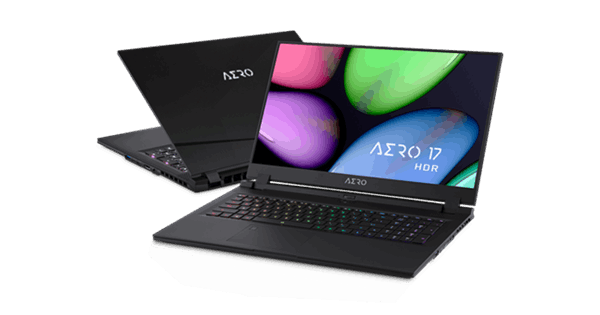 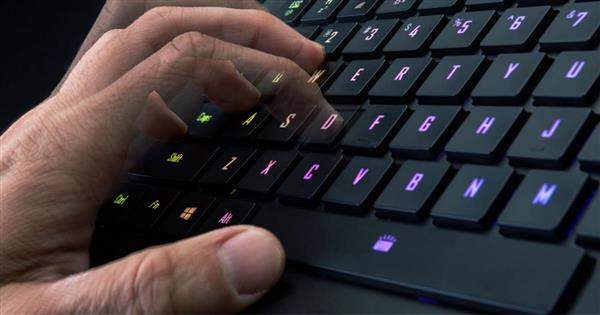 Half the Thickness & Half the Weight 2020 All-new Gaming Notebook with a Mechanical Keyboard
This year, 2020, Gigabyte Notebook brought mechanical keyboards back into play and is dedicated to making notebooks more compact than ever while being a pleasure to touch and use and is half the weight and half the thickness.
IoTEco-systemGPU 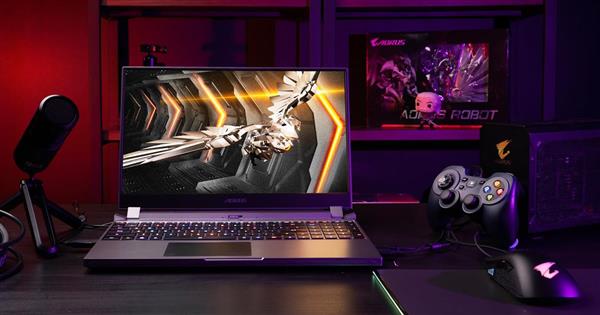 Speedup in-game grinding with the high-speed screen display: What’s the difference between 60Hz, 144Hz, and 240Hz refresh rate?
To maximize the gaming experience, the refresh rate of your screen should keep up with current trends. The refresh rate and the frame rate (expressed in frames per second or FPS) are often-heard terminologies. Nevertheless, what do these terminologies and figures mean? How are they related to actual gameplay? This article will give you a clear explanation.
GPUSSD 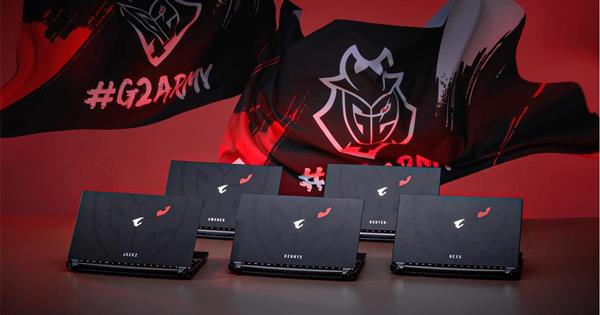 Witness the Sophisticated Craftsmanship: Unveiling the Birth of AORUS 15G
AORUS teamed up with the world’s top-tier Esports teams to build the best gear for professional players. Let’s find out how G2 Esports certified AORUS 15G was born through this exclusive interview.
GPUArtificial IntelligenceSSD 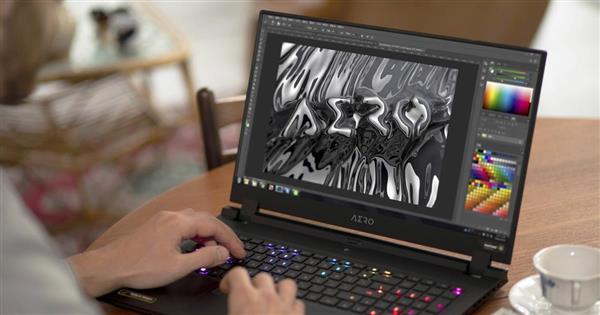 Factors to Consider When Choosing a Laptop Screen: Resolution, Color Gamut, and MORE
GPUSSD
SHARE VIA